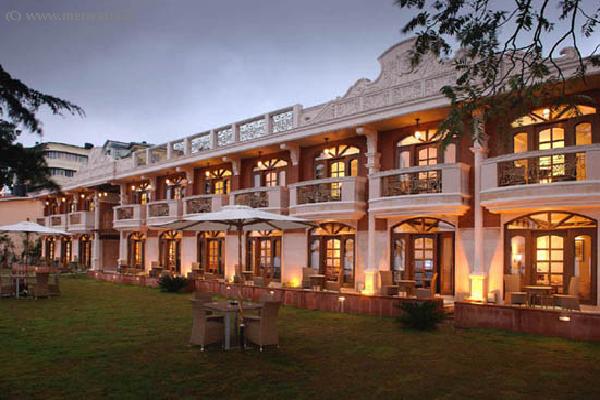 Park Plaza Sylverton, Mussoorie is conveniently located at Picture Palace and within the close proximity of famous The Mall, Kulri Market. The hotel is just 60 minutes drive from the Dehradu...

Mussoorie is a hill station and a municipal board in the Dehradun District of the northern Indian state of Uttarakhand. It is located about 35 km from the state capital of Dehradun and 290 km north from the national capital of New Delhi. This hill station, situated in the foothills of the Garhwal Himalayan ranges, is also known as the Queen of the Hills. The adjoining town of Landour, which includes a military cantonment, is considered part of 'greater Mussoorie', as are the townships of Barlowganj and Jharipani. Tourism is the most significant segment of Mussoorie's economy. It has a nature walk known as "Camel's Back Road". This road takes its name from a rocky outcrop in the shape of a camel's hump. Along the road, a cemetery is located about mid-way on the loop. There is also "Gun Hill" where a cannon was used to sound out midday for many years. Gun Hill is accessible by the cable car on the Mall road. The oldest Christian church in the Himalayas, St Mary's, is situated above Mall Road, and is currently undergoing restoration. Kempty Falls is a nice picnic spot. Company Garden is popular tourist destination. During season, the Company Garden has a vast collection of flowers and plants. Happy Valley has a small Tibetan temple. This was the first Tibetan temple built in India. The temple was constructed in 1960 by the Tibetan refugees. Lal Tibba is another tourist spot of Mussoorie. Picturesque Dhanaulti hill station is about 32 kilometres from Mussoorie. Mussoorie also had India's largest roller skating rink.

Previously known as "Childer's Lodge" is a huge property of more than 300 acres, owned by the Harakh Chand Nahata family. It is the highest peak of Mussoorie near Lal Tibba, it is situated at 5 km from the Tourist Office and one can go on horse back or on foot. The view of snow-clad mountains is exhilarating.

The Kempty Falls are situated on the hilly tracks of Uttarakhand, India, 15 km from Mussoorie on the Chakrata Road. This place is located nearly 1364 meters above sea level at 78Â°-02â€™East longitude and 30Â° -29â€™North latitude.

About 5 km before Kempty Falls on the Mussoorie-Kempty road is a good picnic spot with accommodation and restaurant facilities; boating is also available. With the Kempty river flowing through it, Lake Mist has many small waterfalls made by the river.