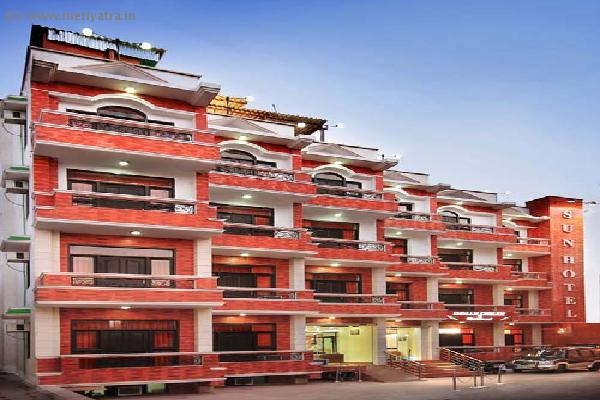 Sun hotels are owned by (LEGACY HOTELS & INFRAPROJECTS LIMITED), a limited company, focusing on 4 star budget hotels and growing in the hospitality sector, with focus on sun hotels brand on...

Haridwar also spelled Hardwar is an ancient city and municipality in the Haridwar district of Uttarakhand, India. The River Ganges, after flowing for 253 kilometres (157 mi) from its source at Gaumukh at the edge of the Gangotri Glacier, enters the Indo-Gangetic Plains of North India for the first time at Haridwar, which gave the city its ancient name, GangadwÃ¡ra. Haridwar is regarded as one of the seven holiest places to Hindus. According to the Samudra manthan, Haridwar along with Ujjain, Nashik and Prayag (Allahabad) is one of four sites where drops of Amrit, the elixir of immortality, accidentally spilled over from the pitcher while being carried by the celestial bird Garuda. This is manifested in the Kumbha Mela being celebrated every 3 years in one of the 4 places, and thus every 12 years in Haridwar. Amidst the Kumbha Mela, millions of pilgrims, devotees, and tourists congregate in Haridwar to perform ritualistic bathing on the banks of the river Ganges to wash away their sins to attain Moksha. Brahma Kund, the spot where the Amrit fell, is located at Har Ki Pauri (literally, "footsteps of the Lord") and is considered to be the most sacred ghat of Haridwar.