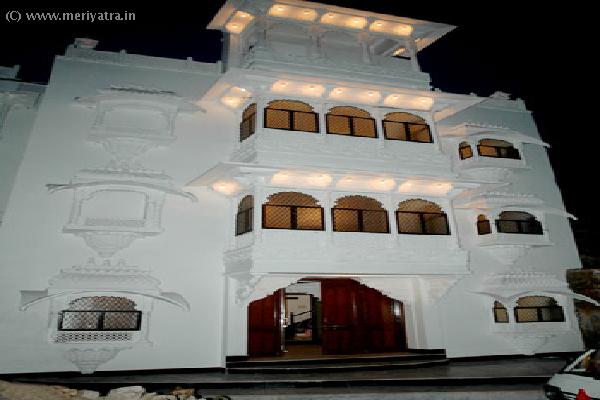 Bundi Haveli, a heritage property in the heart of the old city, it?s backdrop, the Garh Palace and the Taragarh Fort. Recently restored, this elegant new boutique hotel offers 12 rooms from ...

Bundi is a city with 104,457 inhabitants (2011) in the Hadoti region of Rajasthan state in northwest India. It is of particular architectural note for its ornate forts, palaces, and stepwell reservoirs known as baoris. It is the administrative headquarters of Bundi District. The Taragarh Fort, or 'Star Fort' is the most impressive of the city's structures. It was constructed in AD 1354 upon the top of steep hillside overlooking the city. The largest of its battlements is the 16th century bastion known as the Bhim Burj, on which was once mounted a particularly large cannon called Garbh Gunjam, or 'Thunder from the Womb'. The fort is a popular tourist viewpoint of the city below. The fort contains three tanks which never dry up. The technique with which they were built has been long since lost but the tanks survive as a testament to the advanced methods of construction and engineering in medieval India. The Bundi Palace is situated on the hillside adjacent to the Taragarh Fort and is notable for its lavish traditional murals and frescoes. The Chitrashala (picture gallery) of the palace is open to the general public. The Nawal Sagar is a large square-shaped artificial lake in the centre of Bundi containing many small islets. A temple dedicated to Varuna, the vedic god of water, stands half-submerged in the middle of the lake. the lake feeds the numerous bavdis in the old city by creating an artificial water table. The Nagar Sagar twin step wells are identical step wells crafted in pristine masonry on either side of the main spine of Bundi town. The kunds (pools) are currently full of waste from the ancient vegetable market in the vicinity. The Dabhai Kund also known as the jail kund, is the largest of the kunds in Bundi. Though slightly overgrown, it is well worth a visit for the spectacular carvings on the numerous steps leading down to the water level.