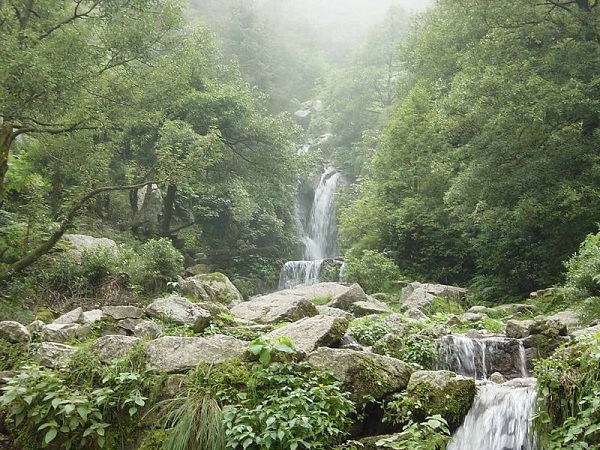 Dalhousie is a hill station in Himachal Pradesh, established in 1854 by the British Empire in India as a summer retreat for its troops and bureaucrats. It is built on and around five hills,... 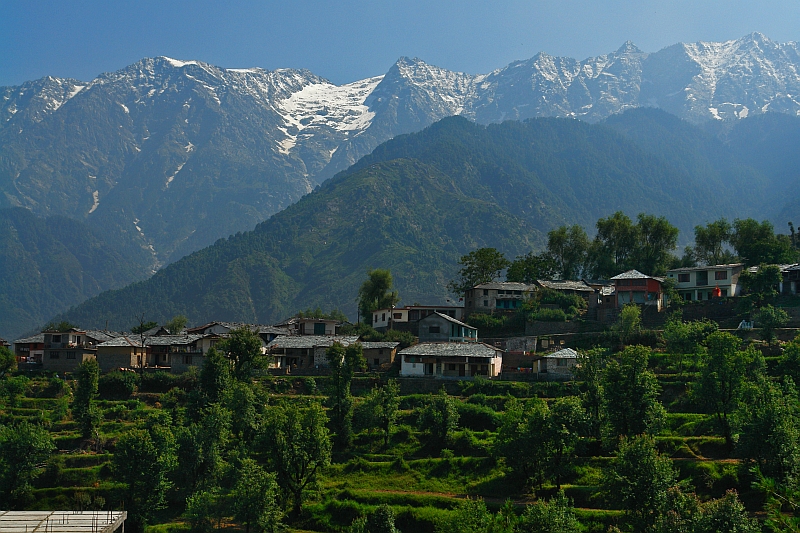 Dharamshala is a city and a municipal council in Kangra district in the Indian state of Himachal Pradesh. It is the district headquarters. It was formerly known as Bhagsu. The Dalai Lama's r... 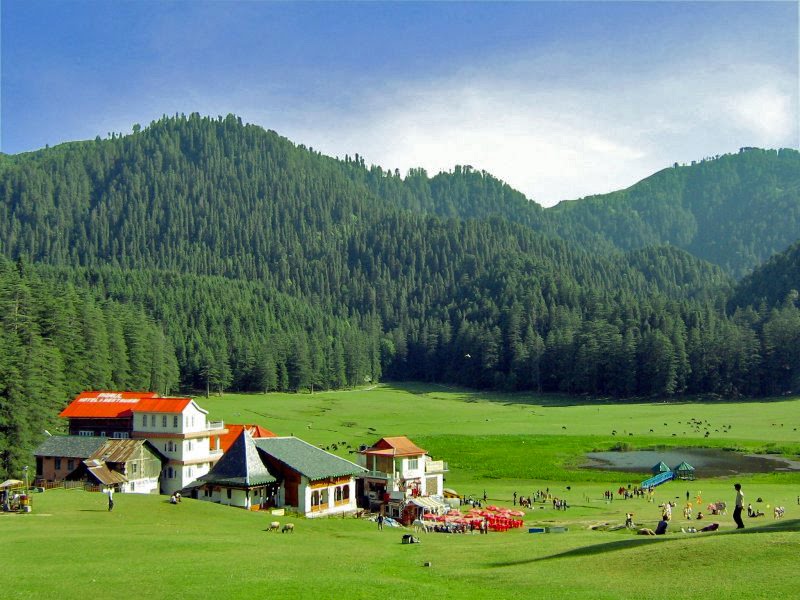 Manali at an altitude of 2,050 m (6,726 ft) in the Beas River Valley is a hill station nestled in the mountains of the Indian state of Himachal Pradesh near the northern end of the Kullu Val... 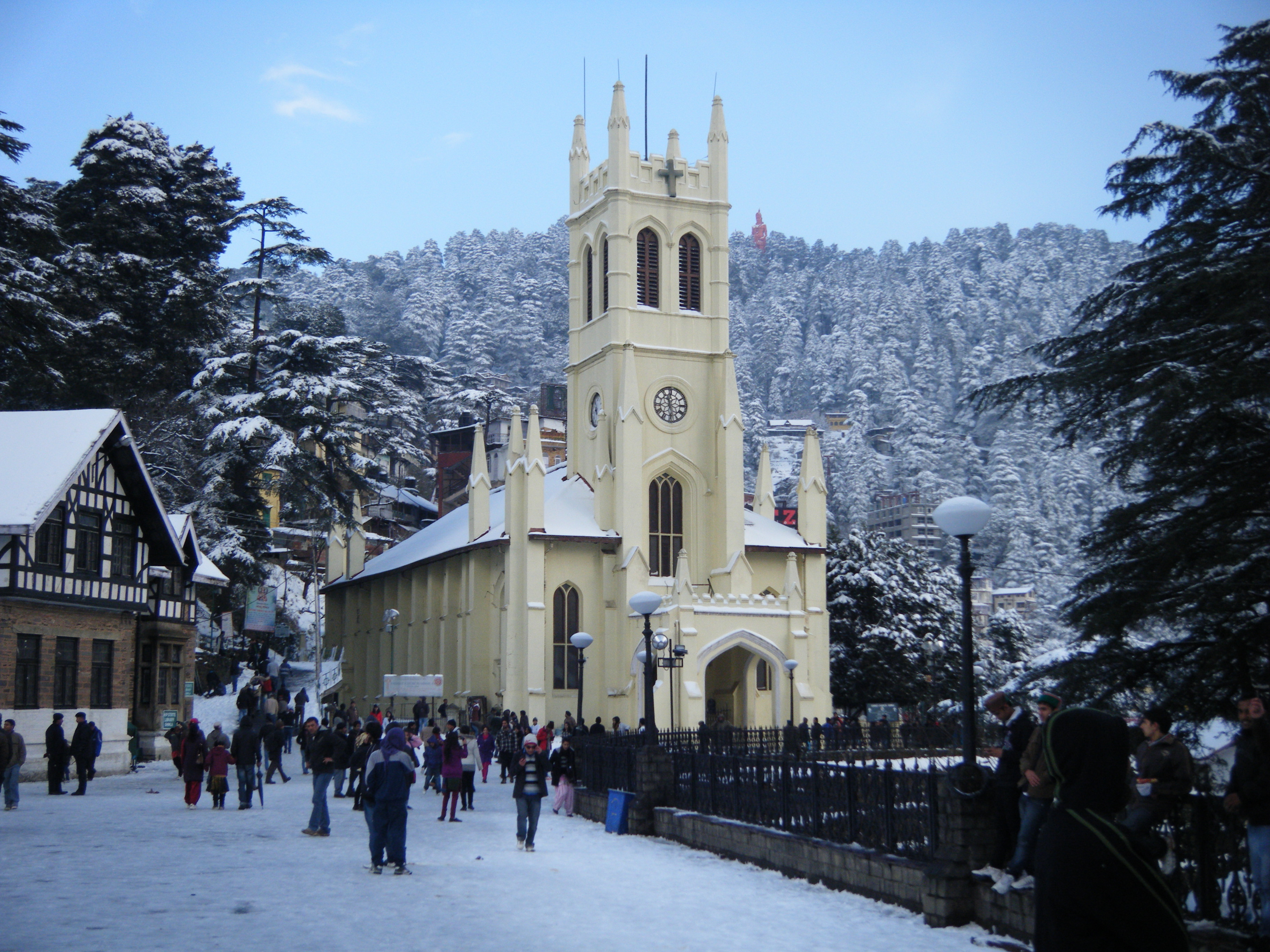 Shimla, also known as Simla, is the capital city of the Indian state of Himachal Pradesh, located in northern India. It is bounded by Mandi and Kullu in the north, Kinnaur in the east, the s...

Himachal situated in the heart of the Western Himalya, identified as 'Dev Bhumi' is believed to be the abode of God and Goddesses. The entire State is punctuated with stone as well as wood temples. The rich culture and traditions has made Himachal unique in itself. The shadowy valleys,rugged crags,glaciers and gigantic pines and roaring rivers and exquisite flora and fauna composes the symphony that is for ever Himachal.
The north-eastern part of the State is decorated with snow-covered, silver-headed mountains, halcyon lakes and green stretches of prairies. The State is rich in flora and fauna. In the north it is contiguous to Jammu and Kashmir, and in the south-east, it adjoins the hilly areas of Uttar Pradesh. In the south and on the western side, the territory is bordered by Haryana and Punjab respectively, whereas on the east it borders Tibet.
The State came into being as a union territory in April 1948, as a result of integration of 30 princely states spread over 27,000 sq km. In 1954, when another 'C' class State of Bilaspur merged with Himachal Pradesh, its area increased to 28,241 sq km. The position remained unchanged till 1966, when on reorganisation of the states, the hilly areas of Punjab were merged with the state increasing its size to 55,673 sq km. Proportionately, the population also increased from 1.4 million to 2.8 million, now standing at 60,77,248 according to census 2001.

Agriculture being the main occupation of the people of Himachal Pradesh has an important role in the economy of the State. It provides direct employment to about 71 per cent of the main working population. Income from the agriculture and allied sector accounts for nearly 22.5 per cent of the total State Domestic Product. Out of the total geographical area of 55.673 lakh hectares, the area of operational holding is about 9.99 lakh hectares owned by 8.63 lakh farmers. The marginal and small farmers constitute 84.5 per cent of the total land holdings. The cultivated area in the State is only 10.4 per cent. About 80 per cent of the area is rain-fed.
Under the diversification approach, major emphasis is being laid on the production of off-season vegetables, quality vegetable seeds, potato and ginger besides soybean, oilseeds and pulses. A project-based approach has been adopted to increase vegetable production. At present, about 41,500 hectare area is under vegetable production with production level of 7.85 lakh tonne. Loanee and non-loanee farmers have been covered and initially maize, rice, wheat, barley and potato crops have been brought under the purview of the scheme. To educate the farmers about the latest technical know-how, the extensive network in the State has been energised for achieving accelerated growth in Agriculture, H.R.D. and water conservation, with proper natural resources management been accordingly prioritised.

Roads:Roads are the lifeline and major means of communication in the predominantly hilly State of Himachal Pradesh. The tremendous potential inherent in various fields in Himachal Pradesh could not be exploited for economic growth in the past due to lack of means of communication. Out of its 55,673 km area, 36,700 km is inhabited and its 16,807 inhabited villages are scattered over slopes of numerous hill ranges and valleys. When the Pradesh came into existence in 1948, there were 288 km of roads, which has gone up to 23,788 km. The State has 8 National Highways having a total road length of 1,235 km.

The total geographical area of the state is 55,673 sq km. As per record, the total forest area is 37,033 sq. km. Out of this, 16,376 sq. km. area is not fit for tree growth comprising alpine pastures, area under permanent snow, etc.
The cultivable recorded forest area is only 20,657 sq. km. Efforts are being taken to bring maximum area under green cover by implementing State's own projects, Government of India's projects and also through external aided projects. The World Bank has also been sanctioned a Rs. 365 crore Integrated Watershed Development Project for the Mid Himalayas. 545 panchayats of 42 developmental blocks in 10 districts would be covered during the next six years.Tere are 2 National Parks and 32 wild life sanctuaries in the State. Total area under wild life sanctuaries is 5562 Km area under National Parks is 1440 Km and total area of Protected Area Network is 7002 Km.

Tourism Industry in Himachal Pradesh has been given very high priority and the Government has developed an appropriate infrastructure for its development which includes provision of public utility services, roads, communication network, airports, transport facilities, water supply and civic amenities, etc. The State Government is poised to transform the State into 'A Destination for All Seasons and All Reasons'. The State Tourism Development Corporation contributing 10 per cent to the State exchequer. The corporation contributes more than Rs. 2.00 crore per annum by way of Sales tax, luxury tax and passenger tax. In the year-2005,Tourist arrival in the State were 7.1 million of which 2008 lakh were foreigners.
The State has a rich treasure of places of pilgrimage and anthropological value. The State has also the pride of being the home to Rishies like Vyas,Prashar,Vashist, Markandey and Lamas, etc. Hot water springs,historic forts, natural and man-made lakes, shepherds grazing their flock are sources of immense pleasure and joy to the tourist.
The State Government is aiming at promoting sustainable tourism,encouraging private sector to develop tourism related infrastructure in the State without disturbing the existing ecology and environment. The main thrust is an employment generation and promoting new concepts of tourism in the State. In order to increase the duration of the stay of the visitors/tourists a special emphases is being laid on the development of activities-based on tourism.