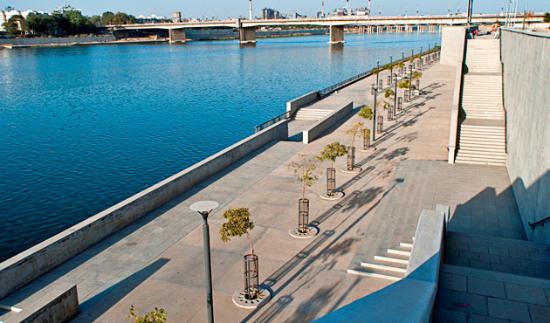 Ahmedabad is the largest city and former capital of the Indian state of Gujarat. The city is the administrative headquarters of Ahmedabad district and is the judicial capital of Gujarat as t...

The history of Gujarat goes back to 2000 BC. It is believed that Lord Krishna left Mathura to settle on the west coast of Saurashtra, which later came to be known as Dwarka, the gateway. Later, it saw various kingdoms: Mauryas, Guptas, Pratiharas and others. It was with Chalukya (Solankis) that Gujarat witnessed progress and prosperity. In spite of the plundering of Mahmud Ghazni, the Chalukya kings were able to maintain general prosperity and well-being of the State. After this glorious respite, Gujarat faced troubled times under the Muslims, Marathas and the British rule. Before Independence, the present territories of Gujarat used to be in two parts, the British and the Princely territories. With the re-organisation of the States, the Union of the States of Saurashtra and the Union Territory of Kachchh along with the former British, Gujarat became a part of the biggest bilingual State of Bombay. The present State of Gujarat came into being on May, 1960. It is situated on the west coast of India. The state is bounded by the Arabian Sea on the west, Pakistan and Rajasthan in the north and north-east respectively, Madhya Pradesh in the south-east and Maharashtra in the south.

Roads: The total length of road (except municipal roads) is around 74,000 km and the length of surfaced roads is around 70,800 km.
 Aviation: The main airport of Gujarat at Ahmedabad is connected with Mumbai, Delhi and other cities by daily services. Ahmedabad airport has now got the status of an International Airport. Other airports are Vadodara, Bhavnagar, Bhuj, Surat, Jamnagar, Kandla, Keshod, Porbandar and Rajkot.
 Ports: Gujarat has 40 ports of which Kandla is a major port. The intermediate and minor ports of Gujarat handled a total cargo of 971.28 lakh tonnes whereas Kandla port handled cargo of 415.51 lakh tonnes during 2004-05.

Tarnetar fair is held at village Tarnetar in the honour of Lord Shiva on the 4th, 5th and 6th days of the bright half of the month of Bhadrapada (August/September). Madhavrai fair at Madhavpur near Porbandar is, held to celebrate the marriage by elopement of Lord Krishna and Rukmani, on the ninth day of the bright half of the month of Chaitra (March/April). Ambaji fair dedicated to Amba, mother goddess is held in Banaskantha district. The biggest annual fair, Janmashtami the birthday of Lord Krishna is celebrated at Dwarka and Dakor with great enthusiasm. Other festivals are Makar-Sankranti, Navratri, Dangi darbar, Shamlaji fair, Bhavnath fair, etc.